The ABPIA, the US entity won in Fed Court today against the internet knock off pirates. There is a TRO which is a temp restraining order against 40 Chinese knock off sites that steal the photos from US wedding gown and prom gown sites and represent that they can make the same dress much cheaper.  "Nationwide we have seen literally thousands of very sad consumers thinking that they were getting a dress similar to what they tried on in the store only to receive a Halloween costume quality item sometimes only days before the wedding and sometimes not at all". said one retailer.

This is very illegal because the intellectual property, design, and investment by the original creator of the item is being used without permission.  If the owners of the websites were in the US the issue would have been addressed years ago but since they are out of the US their hands were tied until now.

In the recent past if there was a judgement against one site it would be removed but five would pop up in its place.  The judge opened the door so ABPIA can add sites at will which will greatly improve the process.  This isn't just about customers being prohibited from getting cheaper dresses.  However, it will discourage anyone from buying copies of dresses based on designers' photos and designs.

Doing business with the offending sites will be very risky because US Customs and Homeland Security will seize the sites and all contact with the counterfeiter will be lost as well as money paid.  The funds on deposit with Paypal and other payment methods will be seized and others in the supply chain will be affected. UPS, FEDEX, PAYPAL, VISA, MASTERCARD and others have been served notice of the court ruling

Any funds on deposit with Paypal will become property of ABPIA.

Many retailers are unable to recover from the damage caused to their businesses.  "This is just like a thief coming in here and stealing our cash register." said one retailer.  "After we have invested in the dresses that cost us more than these counterfeiters are charging, employees, insurance and overhead the customer is lured away with empty promises and horrible dresses that often don't fit and bear little resemblance to the original dress.  So many girls come in for an emergency replacement dress.  We feel sorry for them."

There have also been reports of the dress counterfeitters actually cloning entire websites, stealing logos and more in order to make you think you are doing business with a legitimate retailer.  Don't be fooled.  Do your home work.  If you are asked to provide more than just bust, waist, hip, and length measurements or are told your dress will be made to your measurements you are most likely dealing with a counterfeitterl.  If you are asked to wire money, don't!  Your credit card companies will not usually protect you if you get duped by someone outside of the US and if you do get a dress that looks even a little bit like the picture you are sunk.  Also, don't be fooled by the money back guarantees.  They are sneaky, dishonest and half way around the world.  If you can afford to travel there to collect you can afford to buy from a legitimate retailer in the first place.

This new ruling is serious and we are going to see some real changes in the near future.
Posted by Lynette Robinson at 6:55 PM 4 comments:

According to the latest issue of Vows magazine ABPIA's July filing in a New York federal court against over 50 named online counterfeiters and piracy websites is having a near immediate impact, as several of these sites have contacted the association's legal team to discuss resolution.  Defendants named in the filing for trademark counterfeiting and infringement, cyber-squatting and unfair competition includes dhgate.com, milanoo.com, dreamprom.com, magiebridal.com, and moorepromdress.com.
These are surely not the only sites that will be compromised in the near future because Chinese knock off owners have been known to have as many as 30 different sites all funneling back to one owner.


If you or a friend buys a dress online from other than the authorized retailer for that designer, you risk your money as well as your dreams because these knock off/pirate sites may very well be gone with your money and your dress and you may be shopping for an emergency replacement at the last minute
.  IS IT REALLY WORTH THE RISK?
We recommend that you shop in a real bridal shop where you can see and touch the gowns before you buy and where you can do business face to face with someone under US jurisdiction.  Once your money goes overseas there is very little recourse in the event you are unhappy.

Please visit our sponsors listed at the side.  Thank You.

For far too long the American public has been duped by unscrupulous wedding websites that rely on misleading advertising.  These sites offer bargain-basement prices for the season’s hottest designs and then fail to deliver the promised goods.  The average consumer is unable to reliably determine if the website is offering a legitimate product or a fake because the pirated images are the exact same photos.

The off shore pirates are not subject to US laws or responsibilities which costs are not being collected on the direct shipments to consumers.  What the consumer also does not know is that the designers and owners of the images and copyright products that are currently flooding the US have banded together to enforce the rights of protection that are already in our laws and legal system.

Did you know that:

Your wedding dress could be intercepted by US Customs and if it is determined that your gown was made from a pirated image or contains trademarked lace or beadwork or design, officials would be forced to destroy your dress because it is illegal for the knock off companies to copy such merchandise.

Even if your gown was made legally Customs officials may inspect your gown and apply any value that they want and you would be required to pay 17% duty (just like the legitimate designer does) before you can receive your gown.

When a US company imports goods they must ensure that products are safe.  When you buy directly off shore you have absolutely no assurance.  We have seen reports of dresses and fabrics that are tainted with dangerous substances and/or pins, needles, etc. being left in gowns.

Buyer Beware.  If it seems too good to be true it probably is.
Posted by Lynette Robinson at 8:40 PM 6 comments:

Cariad wrote: "thats because they are using designer images i tell anyone considering buying online to contact the company before purchase and ask to see an actual dress they have made and not the desinger image most wont even reply when asked to see their actual work"
Posted by Lynette Robinson at 8:21 PM No comments:

Hey Rebecca! I did not order from Lily’s, but I did order from Dresstimes. IT IS A SCAM!!! Honestly, I would not buy a wedding dress from any website, AT ALL! I spent 450$ on a dress that could never be used! The workmanship, color, everything was terrible. Luckily, I had one on lay-a-way here in case it didn’t work out and it didn’t. I ended up spending 560$ on the one I wore (which ended up being perfect!). With that I could have bought the original Maggie Soretto I tried to go cheap on. Rebecca, I was married in May and my advice would be to NEVER buy a dress you can’t try on or even touch! I hope this helps
Posted by Lynette Robinson at 10:46 PM 1 comment:

"Just appropriate to add here that today had a bride come in for a first fitting with her Lightinabox gown......she never took it out to look at because she literally got it last night and opened it in my store............lol. After her horror, dry heaving and tears she walked over to my rack pulled one gown out herself and bought it for $1200.00, she was so disgusted and kicking herself for spending the $200.00 on the piece of crap she bought and was beside herself. We had a little discussion about these knockoff sites and she herself stated she couldnt believe that these factories were allowed to do business and sell such a piece of *hit.". Boston retailer posted this today.
Posted by Lynette Robinson at 6:55 PM No comments:

Rossen Reports: Are top websites in business with counterfeiters? Sellers of fake goods are paying big bucks for prime placement on Google 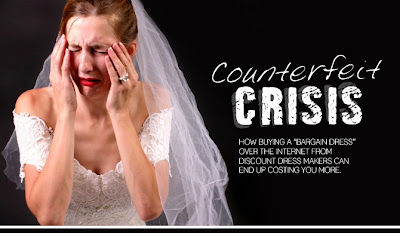 We have repeatedly reported that US Customs has been known to seize illegal copies of everything from DVDs to Clothing.  Here is a national report on it.  Also, stay tuned for the new law New York is working on which will give you a $1000 fine or a year in jail for purchasing illegal copies of items.

Representing another's work as your own is a crime in this country. It is also illegal to post copyrighted material such as pirated pictures from wedding gown designers without permission. Some designers lack the resources needed to chase thieves around the globe and not all laws are favorable to the designers. First of all, I do not suggest that you visit the knock off links as my computer has been infected in the internet research to bring to light this information.

However, if you do click at your own risk and find the link to be broken it means that yet another knock off site has been taken down. The best way to prevent the black hole of broken promises, crushed dreams, cruel intentions and money currently being sent overseas in the hopes of saving money is to buy from brick and mortar stores and dresses you can see and touch.

This blog is filled with information and resources to help you separate the wolves from the sheep. Be sure to follow us for updates as they become available.